You might think that a wrecked vehicle is worthless, and that’s true for anyone else who needs a car to drive to work every day. Believe it or not, there’s still some value left in that totaled vehicle in your driveway. Here are five tips on how to find people who buy wrecked cars and who’ll pay the most for them.

Chances are, the first person to offer to buy your car after an accident is your insurance company. They’ll be happy to take it off your hands, but you should do a little research before agreeing to a settlement. They’ll buy it cheap and sell it for a profit. Most people think their car is worthless after it’s declared a total loss, but that just means that it’s too expensive to repair. If you want to make the most of selling your wreck, then the insurance company may not be the best buyer.

Can you believe there are actual auctions for totaled vehicles? There are. Salvage yards want to find valuable spare parts to sell and look for rare and valuable vehicles at the lowest price possible, so they buy wrecked cars. Sometimes a vehicle just needs a new engine and hasn’t suffered any body damage. Replacing an engine and selling it as a used vehicle can be profitable, so you might see a used car flipper at an auction buying a salvage title car.

The trouble with auctions is that you need to tow your wreck to the auction, and they’ll charge fees if you sell it. Junk car buyers offer better deals because it’s a simple sale to a private party. These buyers plan to resell your totaled vehicle. If they can repair it and make a profit selling it, they will. If they can’t, they’ll sell it to a salvage yard. Either way, they’ll haggle for the lowest price they can get.

The scrap metal yard is where most totaled and old junk cars end up if their parts aren’t worth much. Some of the middlemen trying to buy your car cheap will end up selling it here. You’ll do better selling it to a scrap yard yourself, but there’s another option to check first.

If your vehicle is less than 10 years old or a collector’s model, then a salvage yard is the first place to try selling it. They know how to make the most money from a car that’ll never run again: They take it apart and sell it as spare parts to home mechanics and repair shops. It sounds like a good business, doesn’t it? They make better money buying a salvage title car than resellers, so you’ll get the best price from them.

When it comes to selling anything, you’ll get the most money from the buyer who values the item most. When it comes to wrecked vehicles, that means a salvage yard or a scrap metal yard. Forget the middlemen trying to buy it cheap and go to the people who want to buy it from them. 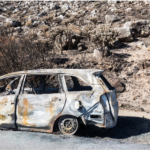