Is it difficult to let go of that old car you’ve had for decades? Maybe it’s a new purchase that’s turned out to be a lemon. How do you know it’s time to sell a vehicle as junk? Below are five solid clues that your old car is a junker.

1. The Repair Costs Are Too High

One of the standards rules of thumb is that if it costs more to repair it than it does to replace it, then you should get rid of it. This rule applies to cars as much as it does to appliances and other mechanical items. Cars can suffer catastrophic breakdowns that ruin the transmission or engine and cost thousands of dollars to repair. It often makes better sense to just buy a used car than it does to pay for a new engine.

2. Resale Value Is Too Low

You’ll naturally ask yourself if there’s anyone who buys junk cars near me when you realize your vehicle is too old to have any resale value. It’s a good idea to research your car’s value before making a final decision, but a car that has depreciated to less than $1,000 can be difficult to sell. Plus, it might be worth more if you sell it part by part. Of course, it depends on the model car you have.

3. The Car’s Body Is Rusted Out

A little rust doesn’t make a car a junker if it still runs well; it just reduces its value. When a car’s body becomes so badly rusted out that it’s falling apart, though, it isn’t worth repairing anymore. The engine and other parts may still be valuable, but the car itself is at the end of its life. In that situation, it makes better sense to junk the car for spare parts. Salvage yards would be the Houston junk car buyers to call.

4. You Need Something More Professional to Drive

When you’re starting out in life, you just need a vehicle that will get you from point A to point B. There’s no reason to worry about what it looks like. If it has peeling paint, rust, or it’s loud on the road, these are just inconveniences. The situation changes when you land the first professional job of your career, though. It’s time to get a vehicle that matches your social standing, and that old car that barely runs can be retired.

5. The Title to the Vehicle Is Lost

Another situation that sometimes happens to people is that they don’t have the title to prove they own a car, so they aren’t able to sell it. Without a title, you don’t legally own a car, or you can’t prove it. For a sale to be official, you need to sign the title and give it to the buyer. If you don’t think an old junker is worth the trouble to get the title from your local government, that’s a good sign it’s time to hand it over to a junkyard.

If your old car fits several of these descriptions, you might find yourself wondering, “Who buys junk cars near me?” The answer to that question is that there are plenty of Houston junk car buyers. Collectors, used car flippers, and salvage yards all have an interest in junk cars depending on their make and model year. 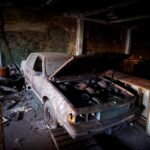