The insurance company may declare that your car is totaled after a crash. Instead of throwing it away, you have the option to keep it and sell whatever is left of it. When selling a totaled car, know exactly how much it is worth.

How Is a Car Totaled?

After a severe accident, an insurance company declares that a car is a total loss when most of its value is lost and cannot be replenished. In this case, the cost of repairing the car exceeds its actual value. So, the insurance provider refuses to cover the repair costs and decides to replace the car altogether. The driver either receives a replacement vehicle or the cost to buy another vehicle of his or her choice.

How Much Is It Worth?

Every junky-totaled car still has some value left. It is possible to sell a totaled car for some money, even if it’s significantly lower than the original value. If half of the car is inoperable, the other half is still operable, so the entire vehicle does not need to be destroyed. First, determine the remaining value of the car.

On most insurance claims, a totaled car has lost 70-75% of its insured value. The exact percentage depends on the extent of the damage. A mechanic and claims adjuster are needed to determine the remaining value.

Why Are Totaled Cars So Difficult to Sell?

Even though a totaled car has some value left, it is still difficult to sell. Many people prefer used cars that have never been in accidents or undergone extensive repairs. A totaled car may be sold as is, typically for parts. Or it can be repaired to improve its value as much as possible. In any case, there is a small amount of value that many buyers tend to overlook. Most of them want used cars that are in the original condition with a stable history.

Every junk totaled car has leftover value, even if it seems worthless to most people. Classic car collectors, mechanics, and car rebuilders buy totaled cars to perform their automotive experiments. A person who cannot afford an expensive used car may buy your junk car. But for many sellers, it takes weeks or months to get a good response for a severely damaged car. When you’re tired of waiting around for a good sale, decide to sell the totaled car to I Buy Junk Vehicles, who will take it off your hands and pay you cash!

If you need to sell a junk car, contact us at IBJV today! 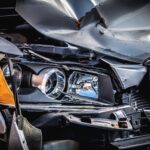